The Conejo Open Space is home to hundreds of different mammals, birds, insects, snakes, other reptiles, and more! While on the trails, if we are fortunate, we may get to see some of the wildlife. Whether we see them or not, they are out there playing a very important role in keeping our open space in its natural balanced state.

Download a 2-page flyer of pictures of local plants and animals!

Check out our most recent brief articles and videos on local wildlife here, or view them all. 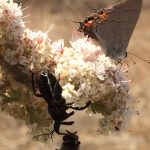 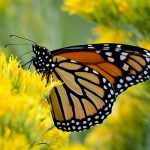 Monarch butterflies now listed as endangered: What we can all do to help them - The migratory monarch butterfly has been added to the endangered species 'Red List' by the International Union for the Conservation of Nature in mid-July 2022. This colorful butterfly is known for its spectacular migration of up to 2,500 miles from… (read more...) 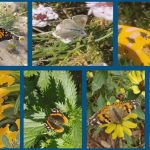 View the recording of Betina Loudermilk’s talk about the plight of the Western monarch butterflies and what you can do to help them survive - For COSF’s summer 2022 Speaker Series virtual presentation on June 8, butterfly educator Betina Loudermilk of Betina’s Little Farm & Butterfly Garden gave a fact-filled presentation about the East and West Coast monarch migrations and lifecycles. She discussed the mysterious… (read more...) 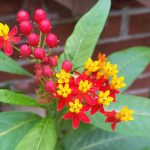 Ventura County Bans Sale of Tropical Milkweed to Protect Monarchs - Because of its role in spreading disease among Western monarch butterflies, tropical milkweed (Asclepias curassavica) has been classified as a “noxious weed” by the California Department of Food and Agriculture. That led to a June 1 notice of a ban… (read more...)

Visit the following website to see pictures of some of the local wildlife.

Wildlife Resources
A variety of resident and migratory wildlife species that are representative of the Santa Monica Mountains region can be found within natural open space areas that have been permanently preserved, as well as remaining undeveloped portions areas. Not only are key habitat resources such as food, cover, and water plentiful throughout these areas on a year-round basis, but rocky outcrops, high peaks, steep hillside and canyon areas combine to provide important undisturbed nesting and breeding opportunities for wildlife. Along with an extensive network of movement corridors that serves to prevent habitat isolation and maintain unrestricted access to these resources, both the diversity and quality of this ecosystem are relatively high. Examples of the range of wildlife found within the Thousand Oaks area are discussed below.

Wildlife Corridors
It is essential that natural open space not only be preserved and protected, but that these areas are linked together in a way that maintains biodiversity and prevents the loss of sensitive animal species. Commonly called wildlife “movement corridors,” such linkages are generally described as routes or paths that can be utilized by animals to gain access to critical foraging, nesting and breeding habitats that are necessary for their survival. As urbanization within the Conejo Valley and nearby communities continues to cause the isolation and fragmentation of habitat, both on a regional and local scale, the need to plan for, and accommodate, a viable network of movement corridors becomes increasingly important. From a regional standpoint, the most important corridors are those linking the Santa Monica Mountains, Simi Hills and Santa Susana Mountains. Approximately 13,000 acres (34% of the land area) of natural open space is expected to be preserved within the Planning Area, and an additional 1,300 acres is expected upon full buildout of the Planning Area. Except for a few remaining key parcels of land, most of the urbanized area is surrounded by an extensive inter-connected ring of natural open space that accommodates the unrestricted movements of wildlife. According to a recent report prepared for the Nature Conservancy, however, the U.S. 101 and State Route 23 Freeways are the major barriers to regional wildlife movements between the Santa Susana Mountains, Simi Hills and the Santa Monica Mountains.

Reptiles & Amphibians
Reptiles occur throughout natural open space areas and commonly include side-blotched lizards, southern alligator lizards and western fence lizards. A variety of snakes are also present, including gopher snakes, striped racers, Southern Pacific rattlesnakes, common king snakes, ringneck snakes, and western aquatic garter snakes. The southwestern pond turtle, which is actually a reptile and not an amphibian, is a State-listed “species of special concern” and can be found in the Arroyo Conejo and its major tributary drainages. Several species of amphibians are present in the cool, moist habitats afforded by woodlands and riparian communities. Amphibians expected to occur include slender salamanders, ensatina salamanders, western toads, and Pacific tree frogs. Toads and tree frogs utilize temporary pond and stream habitats for breeding, and do not require much water for the rest of the year. Fully aquatic forms such as the bullfrog are present along perennial streams and ponds. Another State-listed “species of special concern,” the red-legged frog, may also be present in riparian areas, but has not been found in recent surveys.

Birds
The great diversity of bird species found within Thousand Oaks reflects the variety of habitat types available to resident and migratory populations. Local survey records have identified a total of 171 bird species here. These species include breeding birds that nest here but migrate to warmer climates during the winter months, resident species that are present year-round, and migrants that are here only during the fall and winter. Among the most commonly encountered birds within urbanized portions of the City are house sparrows, house finches and Brewer’s blackbirds, while several species of warblers, California and rufous-sided towhees, plain titmice, acorn woodpeckers, California quail and red-tailed hawks are more typical of natural open space areas. Particularly noteworthy are the seventeen (17) species of raptors, or “birds of prey” which can be found here. The following species are known to nest and breed locally: Cooper’s hawk, American kestrel, prairie falcon, red-tailed hawk, red-shouldered hawk, golden eagle, great horned owl, barn owl and white-tailed kite. Other raptors that range through the area or become more numerous in the winter months include the turkey vulture, northern harrier, sharp-shinned hawk, ferruginous hawk, merlin, and screech owl. As a whole, raptor population densities within the Santa Monica Mountains region, which includes the Conejo Valley, are considered to be some of the highest in the country.

Mammals
Mammals that have either been observed or are expected to occur locally include species ranging from small ground dwelling rodents to large carnivores. Resident populations of small to medium-sized mammals such as deer mouse, Pacific kangaroo rat, Audubon cottontail, long-tailed weasel, striped skunk, and raccoon are frequently encountered in and around urban areas, as well as open space. Larger mammals including coyote, grey fox, bobcat, and mule deer are also common inhabitants, but tend to be more restricted in their distribution and primarily occupy larger natural undisturbed habitats. Although locally uncommon, mountain lions are known to have very large territories that include the Santa Susana Mountains, Simi Hills and Santa Monica Mountains and are occasionally seen by hikers or residents bordering the open space system.

The above paragraphs are taken from the CONSERVATION ELEMENT of the THOUSAND OAKS GENERAL PLAN, City of Thousand Oaks Department of Planning and Community Development, Adopted July 2, 1996.